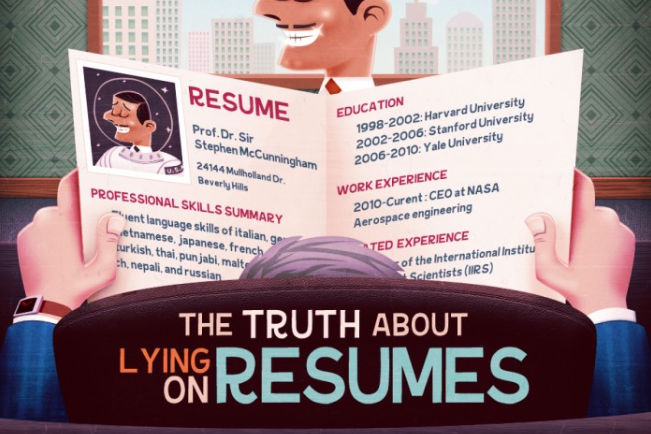 Lying on a resume can be an incriminating act, this is why it comes as a shock to discover that over half of all resumes contain falsehoods in some way or another.

Telling falsehoods on a job resume is a common practise nowadays, the degree of the tale varies. The most common thing lied about is salary rate, with around 40% of all falsehoods attributed to this. Other things commonly lied about on resumes are dates of employment, degrees, references or previous job descrpitions. It has been shown that around 70% of college students would lie on their resumes if it helped them in obtaining a job of their choosing. Other people that lie on their resumes are those with a previous felony record, this accounts for around 7% of falsified resumes. However, only 15% of people actually admit to lying on their resume. People who lie on their resume do so at their own risk, it is not recommended to lie upon a resume as if discovered, even years down the line, the consequences can be bleak.

Although it seems like a common practise, lying on a resume isn’t safe. It is recommended to work with what you actually have and present it in the best way possible without falsifying information.

Need immediate advice? get our ebooks.

Can’t afford our ebooks? Subscribe and we will let you know when they are on kindle promotion